Salt Lake Tribune - Aug. 14, 2008 - "This Internationally Renowned event....has been endorsed by Obama, McCain, Hillary Clinton, and Mayor Bloomberg to name a few famous people. The artist, Rick DellaRatta, has reached the same level as U2 and Bono as philanthropic musicians.

Click here to see publicity from our latest event!

Our press release for your concert goes out nationally as well as internationally to our e-mail list that has been growing since our United Nations Concert.   Radio (see our WFAN Super Bowl Sunday interview on our web-site), Newspaper (see articles under "In the News"), Television ( read about our Televised Dallas Concert and local Evening News coverage in other cities) , Magazines and E-zines are all mediums from which our benefit concert has generated publicity for chosen organizations. In addition we will record and place into rotation a full length commercial advertising this event on our own Jazz for Peace Internet Radio which is now being heard worldwide!

We submit a press list of free listings and other Jazz for Peace friendly contacts to you as well. We also work closely with you to reach areas that are unique to your target audience.

In addition to all of our normal promotion for your event such as press release, e-mailing, internet radio ads, as well as working together with you for additional promotion, the Jazz for Peace organization will make ourselves available for any and all Print, Radio and Television appearances and interviews that can help promote your organization in conjunction with this world class cultural event.

Here are some examples of the kinds of pre-event print, radio and TV publicity than can be achieved by this simple exercise:

Jazz For Peace™ featuring Rick DellaRatta has been featured on the cover of UPWARD, the feature article insert of BIG NEWSh is distributed widely in the streets and subways of New York City as well as Albany, NY. 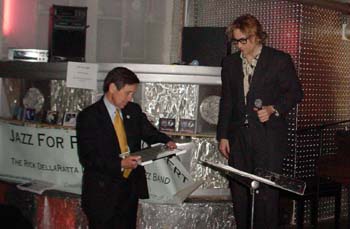 ORGANIZATIONS:
Your free Jazz for Peace Internet Radio Commercial (now with greetings in 7 different languages! ) will be heard by music and humanitarian lovers worldwide!

The The Oyster Bay Guardian - Concert for Jane

Roberta on the Arts Article